The pressure is on! 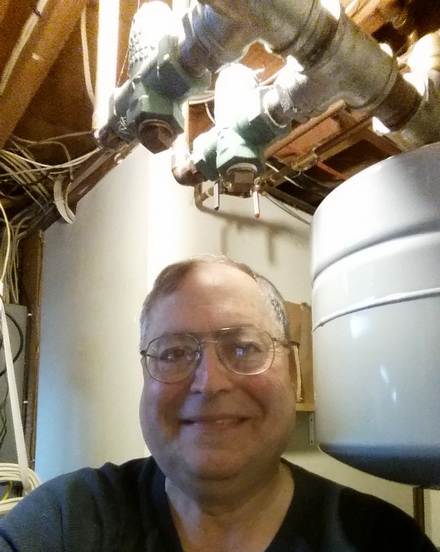 This is the next installment in the Swenton.COM DIY (Do-It-Yourself) tutorials.  If you do not have the necessary skills please use a heating system contractor for repairs.  Improper heating system repairs can cause dangerous conditions such as explosion, scalding burns, fires, hazardous spills and carbon monoxide poisioning.

Last week we noticed the hot water baseboard heating system suddenly became noisy.  The noise was water bubbling sounds as the water traveled through the pipes and baseboards.

I noticed shortly thereafter that the system began venting air from the air purge valve and eventually the water bubbling noise dissipated.  I found this event interesting since the system is closed-loop.  That means I have the automatic fill shut off and the water pressure has been steady at 15 psi forever.  So the big question is "Where did the air come from?"  In retrospect, once I replaced the bad part everything was understood.

Checking back a few hours later the pressure had increased to 20 psi.  This is not good.  What caused the pressure increase?  The automatic fill was shut off.  I drained off some water to lower the pressure.  Later on the pressure dropped even more.  What was going on?

If there was a leak in the pipes or baseboards we should have seen evidence of water leaks or water damage in walls or ceilings.  Nothing like this was observed.

The next thing to explore was the expansion tank.  This is a metal tank roughly about a foot in diameter and a foot tall.  It is typically installed on what is called an air scoop.  The air scoop is a device that "scoops" air out of the water as it passes through the device.  It is installed inline on the main boiler water line.  An air vent valve is installed on top of the scoop.  During operation the scoop will make any air in the water rise to the top of the scoop where the vent valve will discharge the air until water hits the valve.  Then the valve will close.  The expansion tank is usually installed an the bottom of the air scoop.  The expansion tank is installed there for convenience.  The scoop is only acting like a Tee as far as the tank is concerned.  You really could put the tank anywhere but putting it on the air scoop eliminates the extra Tee. 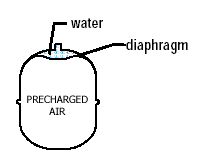 Here's a drawing of an expansion tank on a system with about 12 psi of pressure.  If the precharged air pressure is 12 psi then little water will enter the tank. 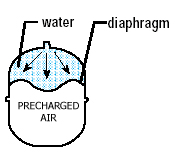 When the system water pressure rises more water will enter the top of the tank and press on the diaphram which will cause an increase in the precharged air pressure.  The precharged air acts like a spring and helps regulate system pressure by expanding and compressing as needed.

I got my tire pressure gauge, removed the protective cap on the expansion tank and proceeded to check the precharged air pressure.  Normally you check this pressure with the system depressurized.  You expect to see about 12 psi.  When I used the tire pressure gauge to test the tank water gushed out of the test valve!  This is a dead give-away that the expansion tank diaphram has ruptured and the whole tank is full of water.  This also explains the air that was mysteriously introduced into the system and why no more air got in after the initial event.

I ordered a new expansion tank on Amazon for about $45. 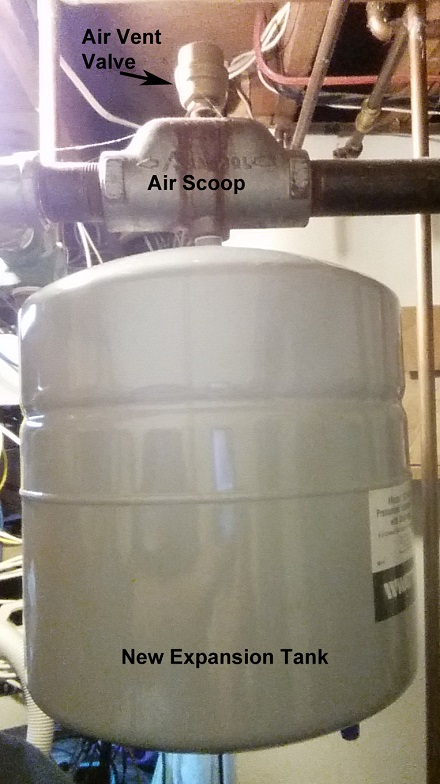 During my testing with the bad tank the pressure got too high and the safety relief valve operated to release the excess pressure.  This is not a bad thing as it is working as desiged. Unfortunately once those valves operate once there is a good chance that it will not reseal well.  Mine was dripping until I manually operated the valve several times.  It is aleays a good idea to replace this valve after a release event.

I ordered a new relief valve on Amazin for about $35. 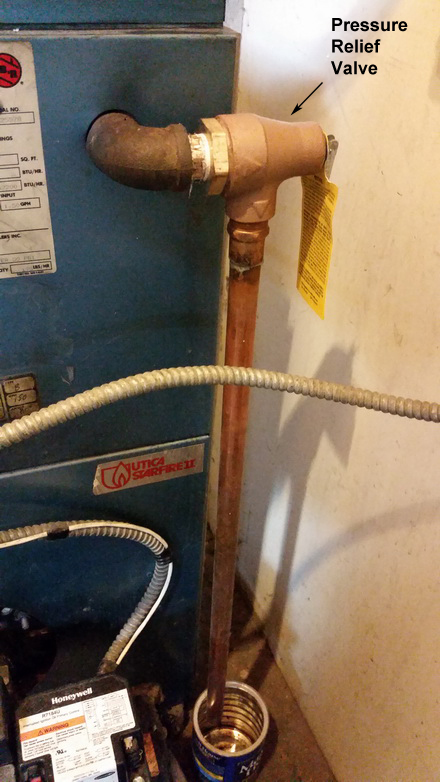 Here's a picture of the new pressure relief valve.  Because this valve will discharge 180 degree water you need to have that pipe going toward the floor to keep people from getting scalded.  I like to put a can under the pipe so I can detect if the valve ever starts leaking.

I ordered a new backflow preventer on Amazon for about $45. 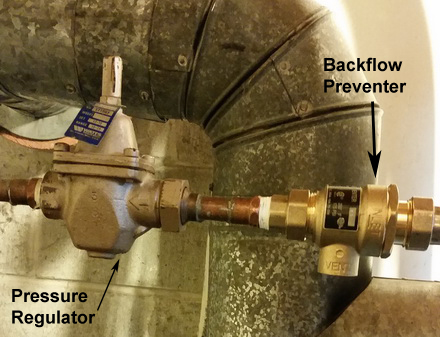 Here's a picture of the newly installed backflow preventer.  The house cold water enters on the left where the backflow preventer has "Inlet" stamped on its body.  The pressure reguator is set to 15 psi so that the 80 psi house water pressure won't over-pressurize the boiler.

The three new parts arrived today and were easily replaced. 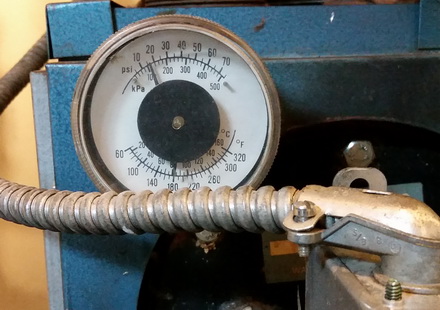 Here's a picture of the pressure/temperature gauge.  The top half of the display is showing about 16 psi of pressure.  The bottom half is showing 180 degrees F water temperature.

So that's it.  Simple fix.  Not too expensive.  It was about $125 for the parts.  The expansion tank was the main fix.  The backflow preventer was dripping and was unrelated to the pressure problem.  The pressure relief valve was replaced as a proactive measure.  These new parts should last a good 15 to 20 years.